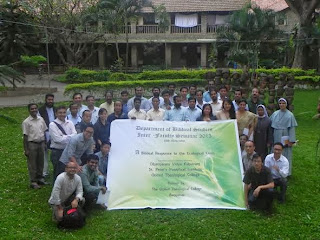 Inaugural Session
The inter faculty seminar was held under the leadership of the Rev. Dr. Dexter Maben, the acting chairperson of the Biblical Studies Department at the UTC. The postgraduate and doctoral students of UTC (Biblical Studies) helped in the conduct of the programme. Rev. Rengbi Rangthang  (D.Th III, NewTestament) was the coordinator for this seminar. The seminar began with praise and worship led by Mayang and team. Rev.Dr. Dexter Maben gave the introduction after which Rev.Dr. C.I.David Joy  welcomed the participants. The inaugural worship began with the lighting of the lamp by the heads of the institutions and the worship led by the doctoral students under the coordination of Ms. Sushana Pramanik. Rev.Dr. John Samuel Raj, the principal of UTC, gave the inaugural address based on Psalm.104:24-31. He challenged the participants to come out of the narrow anthropocentric approach to a wider hermeneutics, reading the Bible afresh in the light of the earth crisis. Since the Bible begins with the creation, it should be given paramount place in our theological and hermeneutical endeavours, he said. 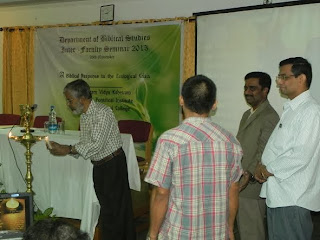 Papers Presented
Six papers, three from Old Testament and three from New Testament, were presented in the seminar. Fr. Jomon Thomas (St. Peter’s) presented the first paper titled “Ecological Concerns in the Law Codes of Pentateuch”. The presenter pointed out the need to go back to the scripture to understand how ecological concerns were central to the Law codes in Pentateuch and to see the progression of thought with regard to the ecological concerns in these law codes, namely, covenant codes, deuteronomic codes and holiness code. Three constituent parts of the created world is emphasised in all these codes, such as land, vegetative world and animal world. Rev.Dr.John Samuel Raj, the principal of UTC, moderated this session and the response was given by Sr.Rekha Rose. The participants suggested the need for taking into consideration the Ancient West Asian context and the practical applicability of these things in the present scenario. There is a need to address the issue of power, theology of justice and re-reading of cross-breeding. 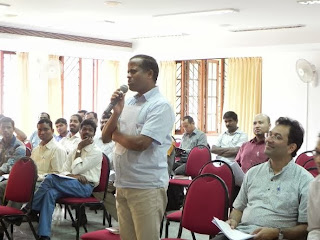 The second paper was on “Paul and Ecology” presented by Sr. Hazel Alexander (DVK). Fr. Dr. Alfred Joseph of St.Peter’s moderated this session. This was responded by Fr. Suresh Mathew. The paper anchored on two main passages in the Pauline letters, Rom. 8:19-23; Colo. 1:15-20. This was explained in the light of other passages dealing with issues like understanding of creation in Pauline writings, the state of creation, new creation and restoration. The transformation is possible only in and through Jesus Christ. The paper saw Paul as an ecological prophet. The paper also gave the implications in the present context and urged the participants to acknowledge the ecological crisis as a spiritual crisis, to develop a new lifestyle with simplicity and coherent with the order of nature and to reconsider the meaning of well-being in relation to the wider context of society and holistic harmony with the cosmos.  The discussions from the floor suggested to see Paul and Greco-Roman context on ecology and to delineate the role of the church, if ecological crisis is a spiritual issue, in the present scenario. There is a need to bring the implications of new creation to present ecological crisis, though further clarity is required as to how to do it. 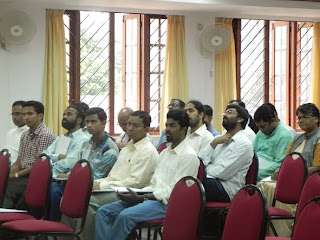 Ms.Lahtaw Nang Dim Pri (UTC) presented the paper titled “Wisdom Literature and its Response to Ecological Crisis”. This session was moderated by Fr.Dr.Joseph Titus (St.Peter’s). The response was given by Fr. Walter D’Souza. This paper dealt with issues like the roots of ecological crisis, the major ecological crisis' and the understanding of creation in wisdom literature. The paper suggested certain theological implications, especially from a tribal perspective. The questions from the floor were basically regarding the practical applicability and logical application of this in the light of the present scenario of development and the need to consider Qoheleth (for example, in chapter three equality of animal and human is mentioned) in making a response from the wisdom literature. 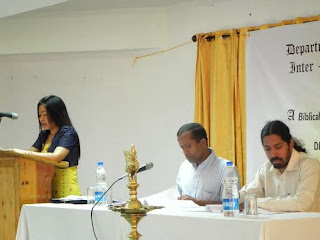 The fourth paper titled “Prophetic concern on Ecology” was presented by Fr.S.Nicholas (DVK). This was moderated by Rev. Dr. Daniel Jones Muthunayagom (UTC). Mr.Liiduo Lanah B (UTC) gave the response. The paper considered prophetic concern in general and Hosea.2:18-23 in particular. The important points of discussion from the floor were covenant between God and earth, the logic of God punishing nature whenever humans commit sins, the eschatology and ecological crises, the animal killing (sacrifice) and ecology. 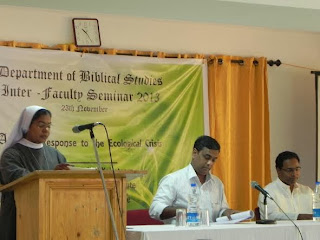 Fr. Bijeesh Chacko(St.Peter’s) presented the fifth paper titled “Biblical Response to Ecological Crisis: Synoptic View Point”. Rev. Dr. C.I.David Joy (UTC) moderated this session and Rev.Saju Mathew(UTC) responded to the paper. The punch line of the paper was the urge for a change from anthropocentric to life-centred hermeneutics. The paper has argued that Bible is eco-friendly and the use of the term ‘ochlos’ in the synoptic gospels can be read as nature from the perspective of marginalisation. The discussion from the floor suggested that it is not only anthropocentric to bio-centric, but now the shift is to read it from a cosmo centric frame work. Jesus was responding to the Greco-Roman colonisation on the land of Palestine and its people. Therefore impact of globalisation needs to be addressed. The birth, death and resurrection of Jesus and its connection with ecology needs further consideration. 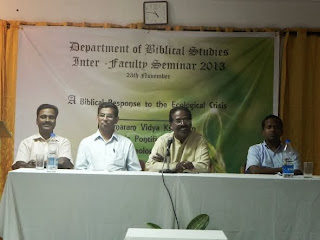 The sixth paper titled “In Him We Live and Move and Have Our Being (Acts.17:28): A Biblical Response to Ecological Crisis” was presented by Rev.I Limatemsu Ao (UTC). This session was moderated by Fr.Dr.Sebastian Mullooparambil (DVK). Sr.Hazel Alexander responded to the paper. The paper was finding out the ecological concerns in the Acts, especially in the early Christian Kerygma. Discussions regarding the paper were mainly on the title and its link with ecology. 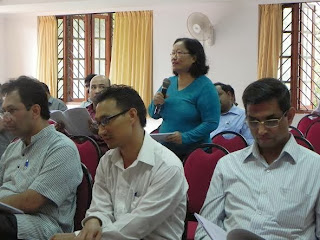 
The concluding session was moderated by Rev.Dr.Daniel Jones Muthunayagom. The main agenda was regarding the theme for the next meeting at St.Peter’s Pontifical Institute, which will be held on 22nd November, 2014. Out of the several suggestions, “Economics and Ethics from Inter-Scriptural Perspective” was proposed as the theme for the next meeting. This was followed by remarks from representing institutions. Fr. Dr. Joseph Titus (St.Peter’s) informed the participants regarding the publication of these paper of the Inter faculty series. Fr. Dr. Sebastian Mullooparambil (DVK) challenged the participants to become ambassadors of the message (discussions on ecology) and Rev. Dr. C.I. David Joy (UTC) pointed out the need for more interaction between seminaries.  The commitment song by Jeviholi Swu and Mayang added colour to the closing ceremony and during this time representatives from participating institutions poured water on plants as a symbol of commitment to ecological concerns.  Rev.Dr. Dexter Maben proposed the vote of thanks. There were also announcements regarding the “BIBLE DARSHAN” the international seminar which is going to be held at the UTC, on January 30-February 1, 2014. The meeting was concluded with prayer and benediction by Rev. Dr. Daniel Jones Muthunayagom.
Reported by Rev. Biju C. 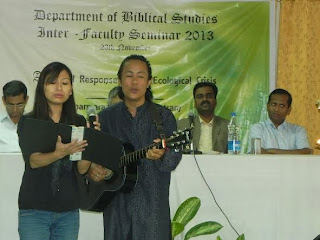 JK
Posted by United Theological College at 10:14 am