MTh application form of the United Theological College is available at this link  https://docs.google.com/file/d/1acUQDJGUzSeTRpO1ax-fT2JL1rBMsaGcKI1Iwb6-jM_FaXCJQobOgYm5yKa_/edit?usp=sharing
Last date of submission of filled in application forms to the college is Nov 14, 2013 without late fee and Nov 21, 2013 with late fee.
Courses offered, cost of application and date of submission.
Posted by United Theological College at 12:39 pm 10 comments:

The Writers workshop conducted by the , Mumbai and the , was held yesterday from 9:00 A.M. to 5:00 P.M. in the YMCA International House in Mumbai Central. The one day workshop was inaugurated by the secretary of the UBM Church Council, Mr. Samuel Jayaprakash Bangera and the Joint Treasurer of the UBM Church Council, Mr. Christopher Fredericks. They also greeted and honoured the resource persons. The workshop was attended by thirty pastors of the CNI, Methodist and Basel Mission churches in Mumbai.

The workshop started with prayer and meditation which was lead by Rev. Jeyakumar, Associate Professor in the department of New Testament in the UTC, . This was followed by a welcome and introduction of the resource persons. Mr. Robert Clements was the chief resource person. He is a very well known journalist in Mumbai and writes a daily column called Bob’s Banter which is published in as many as 30 newspapers and magazines all over the country and in other countries as well. He has an estimated audience of 6 million readers. He was helped by Fr. Jerry Kurian, who teaches Communication in the UTC. The resource persons held sessions on why to write, the spirituality of writing, how to publish one’s writing, writing exercises and current issues in society. The workshop stressed the need to write and encouraged the pastors to write more. Writing for traditional newspapers and magazines and for blogs where explained in an innovative way.

The participants then wrote short write ups in the afternoon, which were discussed to check the title, style, relevance and attractiveness of the write up. The participants came up with very interesting and challenging write ups.

Rev. Susheel Sumitra of the in Mumbai made all the arrangements for the workshop with permission, guidance and help from Mr. Samson Frank, the President of the UBMC, and his colleagues and lay leaders in the church. The participants of the workshop felt that the workshop was of great interest and even exceeded their own expectations. They were particularly happy that it gave them practical insights on why to write, how to write, what to write and how to get their writings across to their congregation and church and how writing will give them a cutting edge in their ministry. The participants also felt that more such workshops on writing skills should be held in the near future. 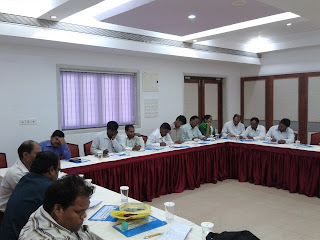 The workshop is a new initiative by the Publications Department of the UTC and the Masihi Sevak under its editor Dr. Dexter Maben. The first such workshop was held in UTC, after which participants suggested that such workshops could be held all over the country and could be hosted by churches in various regions. The Masihi Sevak is a publication meant for the alumni of UTC and includes articles and write ups by the UTC alumni from all over the world.

Posted by United Theological College at 1:18 pm No comments:

BD application form of the United Theological College is available at this link https://docs.google.com/file/d/1lLIA9tFJSxK2Cwe8sbwubtDkYtTdZlOuIEWFwiXIpP8OLoWvxzevxu0vC3c2/edit?usp=sharing
Last date of submission of filled in application forms to the college is Nov 14, 2013 without late fee and Nov 21, 2013 with late fee.

DTh application form of the United Theological College is available at this link https://docs.google.com/file/d/1Qq9gU6iwYmyO6wYYlF-6DJE19jBuWw59Jk2jxSuGSC83cVqsyHob9DSRcyuO/edit?usp=sharing
Last date of submission of filled in application forms to the college is Nov 14, 2013 without late fee and Nov 21, 2013 with late fee.

Courses offered, cost of application and date of submission.
Posted by United Theological College at 12:48 pm No comments:

Courses offered for the academic year 2014-15

Scholarships:  Limited scholarships are available for needy candidates after the successful completion of their first year for B.D./M.Th. studies.  Two scholarships are reserved every year for WOMEN, and four for candidates coming from North India, in order to encourage theological education in North India.
Kindly address all enquiries to:
Posted by United Theological College at 1:17 pm 7 comments:

I am happy to announce that the UTC Annual Refresher Course for the year 2013 is scheduled to take place from 22nd October to 24th October 2013.  The theme for this year is: “The Church and Theological Education : Challenges and Prospects.”

The UTC Alumni will also have their Annual General Body meeting on the 24th of October at 2:00 p.m. (for members only).   Those of you who have not yet become active members of the UTC Alumni Association are encouraged to do so by paying the membership fee as follows:

Please get in touch with Rev. J. Jeyakumar, the Interim PRO of UTC, to let us know about your willingness to participate in this programme.  Accommodation and food will be arranged from 22nd October morning until 24th October afternoon (4.00 p.m.) only.  However, if anyone is arriving on 21stOctober (evening), please inform Rev. J. Jeyakumar for accommodation.  Accommodation is only for 100 people.  Kindly book in advance.

We will appreciate if you attend all the sessions since the two evenings from 5:00 p.m. are kept free.  Hoping to see you at the UTC Annual Refresher Course, 2013!

PS:  Food and Accommodation will be made available on Actual Charges


for those who wish to bring their families along.


All the Former Students of the United Theological College, .

Greetings to you all!


We are delighted to inform you that the General Body Meeting of the Alumni Association of the UTC will be held on 23rd October 2013, at 5:00 pm, at the , .  All the members of the Association are requested to be present:


We are enclosing herewith the following for your information.


3.      Refresher Course Notice from the Convener

Posted by United Theological College at 12:24 pm No comments: