Inauguration of the Francke Foundation exhibition

The Francke foundation exhibition was inaugurated in UTC by the German deputy consul general in Bangalore Mr. Hans-Günter Löffler on June 10, 2012. In his speech he talked of the coming together of Indian and German culture and how important it is to learn  from each other. 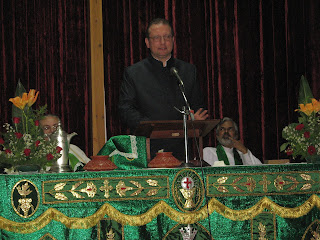 Rev. Dr. John Samuel Raj talked about the importance of such an exhibition in UTC. He said "The Francke Foundation was founded by the Prof. Dr. August Hermann Francke (1663-1727) in Halle, which is in the eastern part of Germany. Prof. Francke was an outstanding theologian and a visionary as well. He is known for his piety but more than that he is remembered for the great contribution of imparting knowledge with others who did not have access to it." The need for this exhibition according to the principal "is because of someone who is known to all of us – Prof. August Hermann Francke’s famous student, the missionary Bartholomäus Ziegenbalg and his colleague Henrik Plütschau. When the Danish king wanted missionaries for his Danish Colony in Tanquebar he did not find anyone suitable or willing among the Danish clergy, and therefore he asked Father Prof. Francke whether he could be of help in this regard. Francke was already sending missionaries to various parts of the world at this time, and he readily agreed to send two young students, who came then in the year 1706 via Denmark to the shores of India and landed in Tranquebar. Both were full of enthusiasm and commitment for modern education following the pattern of Halle and eager to explore their new place." 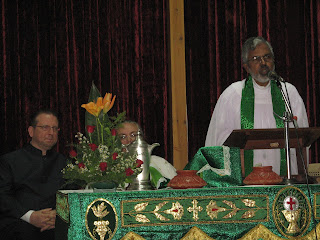 He continued "He was followed by more than 50 other missionaries of the Danish Halle Mission. Among them is the famous missionary Schwartz, who was very influential at the Tanjavore court and initiated there a palm-leaf library. All these missionaries because of their incredible passion for scientific education took keen interest in improving the system of education in the native schools they established, and encouraged literacy particularly among Dalits and women. Ziegenbalg started most probably the first school for Indian girls. The missionaries had regular communication with Germany in the form of letters and reports whenever they saw something new. These letters and reports are well preserved in the Halle library."
Today the letters and reports of the missionaries are an indispensable source of research-material for anyone doing research on 17th and 18th century in South India. Therefore scholars in the areas of religion, sociology, mission, anthropology, history, botany, biology etc., take keen interest in the archives of Halle.

Posted by United Theological College at 1:39 pm No comments:

The re-opening of the United Theological College, Bangalore was held with the traditional principal’s tea, introduction of students and staff, and the covenant service on Sunday evening. The opening tea which brought all members of the community together was held at 4:30 P.M. while the service was held at 6:30 P.M. in the Tagore Hall. The old students are back after a two month vacation and the new students joining for the BD, MTh and DTh programmes have just arrived. The principal Rev. Dr. John Samuel Raj along with Rev. Dr. Sahayadas and Rev. Dr. Allan Samuel Palanna led the covenant service.

The principal also introduced the new faculty member for the  department of Mission and Ecumenics, Sr. Dr. Rani Joseph Mary Shruti. She is a member of the Congregation of Sisters of Notre Dame, Coesfeld, Germany. This is the first time that a Roman Catholic nun has been appointed as a full time faculty member of the UTC. Sr. Dr. Rani has taught in two theological seminaries in India and has worked among the tribals in West Bengal and other parts of North India.


The retreat for faculty members and senior administrative staff of the United Theological College was held at the Fireflies Ashram, Bangalore on June 6, 2012. The half day retreat was led by the Fireflies director Sidhartha. The ashram situated in Dinnepalya, Kaggalipura is a place to retreat, rediscover, regroup and renew. The earth and eco friendly place is filled with granite stone architecture, old style villas, a walking path and meeting places.

The faculty members and bursar started for the ashram in the morning and was greeted by the friendly staff and the director. Mr. Sidhartha introduced the teaching staff to the ashram, the different stone works, the idea behind the place and the inter religious thought that has gone into the work there.

The spiritual guru Sidhartha in his talk gave stress to climate justice, food security, alternative power, and the suffering of fringe communities. He reminded the faculty on the future yet imminent threat of lack of water and offered the alternative of cultivating different crops as a way to tackle this danger. He shared his fears of the possibility of gated cities, and elites protecting their own interests. Different faculty members shared their own views on the topic as well.

The principal and faculty members thanked the ashram members for their hospitality and warmth. The faculty members also used the time available to interact with each other and relax in the green environs.

Posted by United Theological College at 4:51 pm No comments: