Carols unheard: A call for an inclusive Christmas 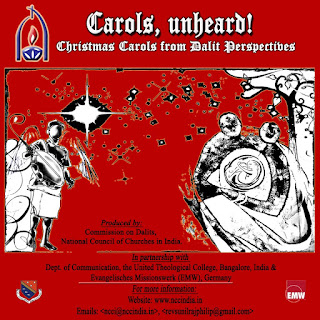 The Christmas season brings in memories of the commemoration of the birth of Jesus, celebration, carol songs, church services, community activities and sharing of food. Each church denomination celebrates the birth of Jesus with pre-prepared services and prayers. Carol songs in English and the vernacular are sung in houses and churches and people of all communities, castes and groups get together in their own celebrative ways.

The Carol songs we sing and listen to are traditional and well known to many. But there are limitations with language, context and lyrics. Many a time this is brushed aside and we get together in the spirit of the Christmas season forgetting everything else. But Carol songs are much beyond of what we know. Several communities have expressed their feelings and emotions about Jesus, his birth narrative and how Jesus gives hope and life in the midst of oppression and discrimination.

Such songs have been unheard, unseen and unsung by the mixed communities in churches, theological colleges and seminaries. Various dalit communities in different states of India have always sung from deep within their consciousness of being oppressed for centuries together. Such a deep consciousness finds support from the babe who was born in the midst of nothingness. Despite having everything, Jesus chose to be born in this nothingness, thereby associating himself with those who have been deprived their rights and their humanity. Carol songs gain deep meaning when sung from the consciousness of various dalit communities.

The United Theological College and the NationalCouncil of Churches in India (NCCI) have always stood for helping to build a church which should try hard in getting rid of caste, gender, and all sorts of discriminations within and outside the church. As part of this commitment the NCCI with support from the Evangelisches Missionswerk in Germany (EMW) and in partnership with the Department of Communication, UTC decided to bring out a CD on “Carols unheard: Christmas Carols from Dalit perspectives.”

The talks about how this could be done were done in the early part of 2012 with liaison work happening between Rev. Sunil Raj Philip, the secretary of the Dalit Desk of the NCCI, and an alumna of the college, and the Communication Department in the UTC. The actualization of the project happened on November 2,3,4 and 5 with recording done in the UTC recording studio. The release of the CD was held on November 6, 2012 with the first copy being released by the principal of the UTC, Rev. Dr. John Samuel Raj and the first CD being given to Rev. Dr. Vincent Rajkumar, Director of CISRS and Executive member of the NCCI. The students, faculty and staff of the college graced the occasion.

The songs have been written, set to tune and sung by students from various theological colleges and the UTC. The songs include Oriya, Tamil, Hindi, Telugu, English and Malayalam songs. Students from various states starting from the North East till down South were the backbone of this venture. The songs reflect the self-determination of the dalit communities and will be an inspiration to all the churches in India. We hope that this Christmas season will be more meaningful with the dissemination of these songs.

The songs are available for free download from http://soundcloud.com/commission-on-dalits-ncci This we hope will ensure the easy and concerted distribution, listening, appreciation and internalizing of the songs by the UTC alumni, various church denominations and Christians at large in India and all over the world. May we listen to these songs and be able to hear the unheard during the birth of our Lord and saviour Jesus Christ. 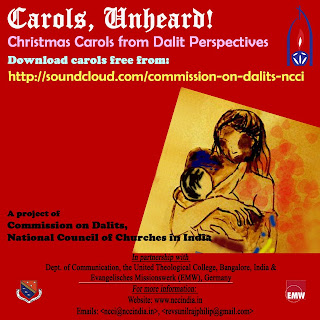